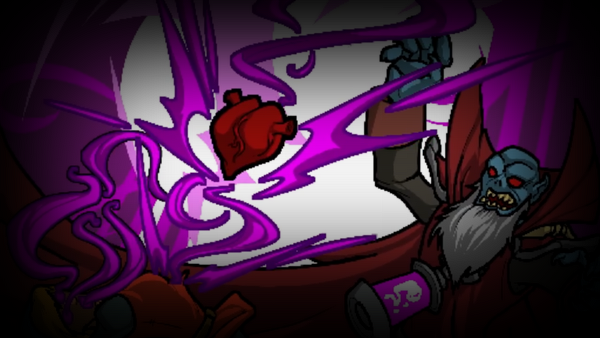 This Wiki is dedicated to the game "Crypt of the NecroDancer" developed by Brace Yourself Games.
It was released on July 30, 2014 on Steam early access. The full release followed on April 23rd, 2015. The game was also released on GOG, Playstation 4, Playstation Vita and Nintendo Switch.

An expansion to the game, "Crypt of the Necrodancer: AMPLIFIED", was released on January 24th, 2017.

You can watch the developer's blog and the forum for the most recent updates and general discussion on the game.

The game is officially described as a "hardcore dungeon crawling (roguelike) rhythm game. Move to the beat with the game's epic sound track or your own MP3s.
Play with keyboard, gamepad, or even DDR pad!"

If you want to learn more about the game, the gameplay and story pages are the way to go. We strive to keep those free of spoilers and advanced tips, so you do not spoil your fun.

If you do want advance tips, go to the Tips and Hints page, and if you need advice on or want to discuss how to get Achievements, just head to that page.
We have opened the comments below each page, so you can easily communicate ideas/suggestions/problems in case you do not want to implement them yourself.


However, if you want to participate in this Wiki, then you are always welcome to do so. Do not be worried about breaking anything - even if you do, then we can fix it or roll back all changes.

If you have any questions regarding the Wiki or Crypt of the NecroDancer, feel free to contact an admin, we'll be happy to assist you!

Cadence of Hyrule, a Nintendo Switch exclusive Legend of Zelda crossover expansion, is revealed for Spring of 2019.

Crypt of the NecroDancer launches on the Nintendo Switch February 1st in the Americas&Japan, and February 8th in Europe and Australia. The port added one exclusive character, Reaper.

Crypt of the NecroDancer hits Playstation 4 and Playstation Vita on Feb. 2nd, 2016. Playstation Exclusive special guest composer(s) Jake "Virt" Kaufman and Girlfriend Records join forces in this version of the game along the original 3 composers, Danny B, A_Rival, and FamilyJules7x.