View source
watch 01:36
We're Getting Mutants in the MCU - The Loop
Do you like this video?
Play Sound

Dead Ringer is the Zone 4 boss when playing as Cadence. He appears as a demonic figure wearing a bell on his head and wielding a mallet. 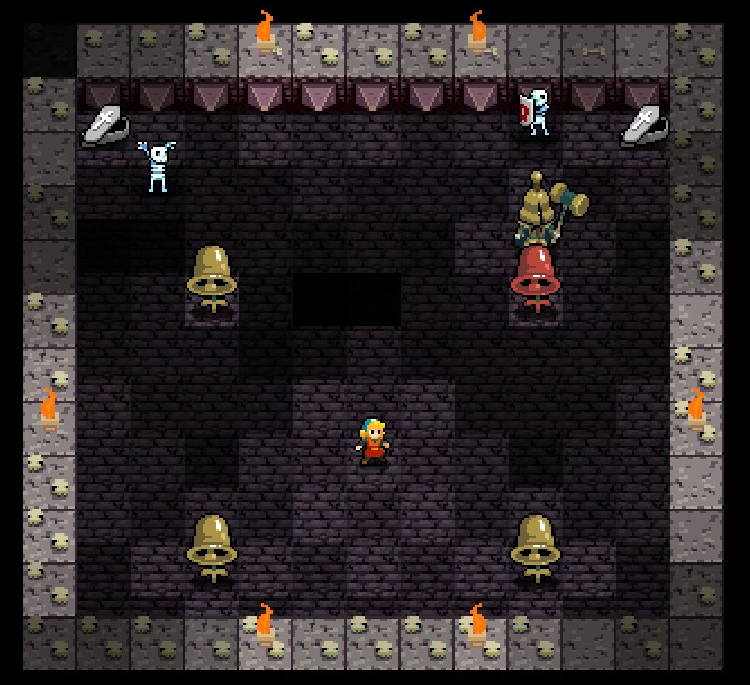 Dead Ringer has 2 hearts of health, but is invincible to most forms of damage. Attacking him with a Dagger of Phasing or 10 or more damage will deal 1 heart of damage to him and immediately start Phase 2. In addition, earth spell can also deal 1 heart of damage to him if cornered. Using one of these attacks against him again will end the fight. Additionally, Earthquake Scroll will damage both Dead Ringer and the bells and gong, ending either phase regardless of Dead Ringer's health.

At the top corners of the arena are two sarcophagi that will spawn Skeletons, Skeleton Mages, Shielded Skeletons, or Mounted Skeletons, which will harass the player during the fight. Destroying the coffins will prevent these enemies from spawning.

Phase 1: Dead Ringer will immediately try to ring all four bells by moving into the square above them and striking them on his next move. At any point, he can get distracted by spotting the player in a cardinal direction, and will charge forward (you can distract him before he rings any bells if you are quick). When charging, he moves once per beat, otherwise he moves once every two beats. He is capable of moving diagonally. During this phase, his bump attack deals two hearts of damage.

If a bell is rung (either by the player or by Dead Ringer), a miniboss will spawn:

If Dead Ringer charges at the player and crashes into a bell, the bell will be destroyed and will not spawn a miniboss. Bells can also be destroyed with bombs. After a miniboss has been killed, it is possible to summon another by attacking the bell that spawned it.

Bells are treated as though they were immobile crates - they do not count as enemies, and will only be deliberately attacked if the player is standing next to them. However, the bells can be rung unintentionally by striking a nearby enemy with a weapon that can hit multiple targets at once.

Phase 2: Once all four bells have been either rung or destroyed, Dead Ringer will begin to glow yellow and move much faster. All of the bells will disappear (but NOT the enemies or minibosses) and a gong will spawn on the top-center of the field. Dead Ringer moves once each beat, and can move diagonally. If he spots the player in a cardinal direction, he will charge across the screen on his next turn. Dead Ringer's charge now takes him as far as he can possibly move, until he collides with the player (dealing a massive four hearts of damage) or a monster/miniboss (which will immediately be destroyed). The player must trick Dead Ringer into charging into the gong, which will end the fight immediately.

It is possible to redirect his charge attack with a flail or the ring of war. This works in both phases.

After his defeat, Dead Ringer will survive the fight, breaking his bell-shaped helmet open, revealing that he is Dorian, Cadence's father, in a sickly and "cursed" state. According to him, he was being controlled by the Necrodancer to fight her against his will. He will then accompany Cadence during her final battle against the Necrodancer. Defeating Dead Ringer unlocks Dorian as a playable character.