Death Metal spawns near the middle of the arena and has 9 health and 4 phases. Upon entrance, it says "Ah, welcome!". 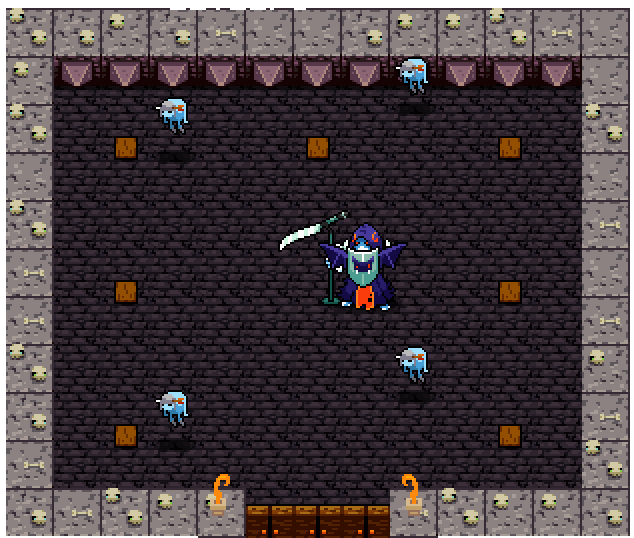 Phase 1 (9-7 HP): Death Metal wields a shield and can move cardinally every third beat, pursuing the player. It can only be hit directly from the sides or behind during this phase; when hit from the front, it is knocked back instead (unless when using a piercing weapon) and 2-3 Bats are spawned. It is recommended to kill the enemies around Death Metal first as all it does this phase is chase the player around the arena. The shield is lost on the following phases.
Phase 2 (6-5 HP): Death Metal will move cardinally every beat, away from the player. On the seventh beat, it will raise its free arm and shout "Come to me!"; if no damage is dealt within the next three beats, 1-3 Skeletons (Shielded in Zone 2; Mounted in Zone 3; Lich in Zone 4;

Lightning Mage in Zone 5) will be spawned. When hit, Death Metal teleports to a random spot in the arena. Death Metal will not attack this phase.
Phase 3 (4-3 HP): Same as phase 2 except Death Metal raises his arm on the sixth beat, shouts "End of the line!", and Yellow Skeletons (Shielded in Zone 2; Mounted in Zone 3; Lich in Zone 4;

Red Lightning Mage in Zone 5) are spawned instead.
Phase 4 (2-1 HP): Death Metal moves vertically every beat, pursuing the player and attacking only if they're in its way; if it is on the same row as the player, it will move horizontally in the opposite direction. On the fourth beat, it raises its free arm and shouts "Breathing fire!" or "Bathe in fire!"; if no damage is dealt within the next four beats, it shoots a fireball (dealing 3 damage) horizontally. Death Metal will only move when its arm is not raised. Death Metal's beat counter for his attacks in phses 1-3 are reset when damage is dealt.

Note: There is a limit for the number of enemies that's different depending on the Zone variant. Enemies will only be spawned when the amount of enemies currently in the arena is under this limit.