King Conga is a boss in Crypt of the NecroDancer. He sits on a throne guarded by two "conga lines" of Zombies. Defeat the Zombies, then conquer King Conga. 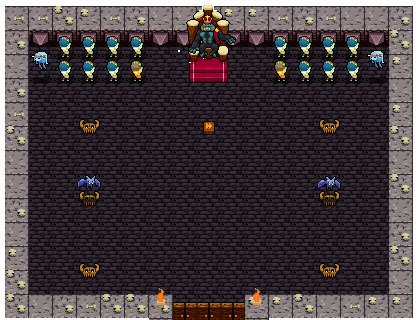 The fight takes place in a large room with several monsters from the Zone you entered from, as well as two lines of eight Zombies. King Conga sits on a throne at the top of the room and cannot be hit, except by a Dagger of Phasing.

Unlike regular Zombies, the lines of Zombies in this fight act like snakes - the "head" Zombie of each line is colored yellow and will follow the player every 2 beats, while all the Zombies behind it will follow the Zombie ahead of them every 2 beats (even if this causes them to move away from the player). If the head Zombie of a line is killed, the Zombie behind it turns yellow and becomes the new head. If a middle Zombie in a line is killed, the Zombie behind it also turns yellow and becomes a head, effectively splitting the line in two with both heads chasing the player. If a lone Zombie becomes separated from all lines, it will turn red and gain the ability to move every beat, chasing the player. If any Zombie becomes confused or affected by the Fear Scroll, it will immediately turn red.

King Conga attacks only when all the Zombies are killed, or when the player misses a beat. King Conga will chase the player, moving cardinally or diagonally every beat. Once hit, he will teleport to a random location in the room. He has two HP in Zone 1, three HP in Zone 2, four HP in Zone 3, five HP in Zone 4, and

With Bolt and Coda who double the tempo of the beatmap, the game effectively inserts a beat halfway between every original beat. This results in them moving for 13 beats, skipping the 14th, moving on the 15th, and skipping the 16th. This is easier to get used to by watching the beat bars on the bottom of the screen for some time.

Losing your Groove Chain before defeating all of the Zombies will also cause King Conga to leave his throne to attack, but he will teleport back to his throne unhurt (except by a Dagger of Phasing) upon being hit.

Using a high-tier Shovel or a Bomb on King Conga's throne will aggro him, allowing you to beat the level much faster than by killing the Zombie lines first. The throne is effectively a catacomb wall with a wall torch. The shovel must be better than Titanium for this to work.

In the Zone 1 variant, the fight consists of two eight-Zombie conga lines, two Bats, one Red Bat, and two Ghosts.

In the Zone 2 variant, the fight consists of two eight-Zombie conga lines, one Bat, one Red Bat, two Armadillos, one Yellow Armadillo, one Skeleton Mage, and one Black Skeleton Mage.