You fight the Necrodancer as Cadence and Dorian. He continually summons minions to his aid. 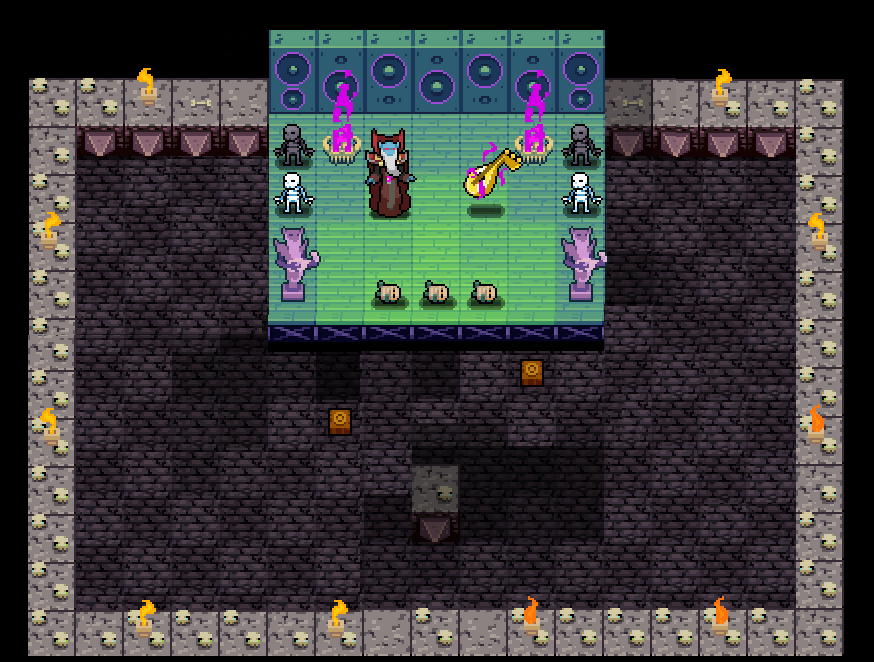 After defeating Dead Ringer as Cadence, you will meet Dorian and be transported into the Necrodancer's lair. Button presses from here on out will control both Cadence and Dorian simultaneously. If either die, the game ends. In the first phase, a number of traps consisting of a circle surrounding a dot will need to be triggered - they will spawn in groups of two, and must be pressed at the same time to trigger. The first pair opens the door to the Necrodancer's main room, and the next four progressively bomb the Necrodancer's stage, releasing more minions until the Necrodancer and the golden lute are released from the stage, starting the second phase.

In the second phase, the Necrodancer will summon a miniboss and wander the room, summoning more minions and blasting horizontal cones of ice or setting off a 5x5 explosion, which does 3 damage to the player and teleports the Necrodancer. The Necrodancer will only take damage from the Golden Lute at this point, and teleports each time he is hit. Note that this Dorian does not have a shovel, nor does he have the boots of leaping, and also cannot equip the Golden Lute weapon in this fight.

The stage tiles have the same durability as shop walls, and can be destroyed using methods that destroy shop walls, such as bombs or the blood shovel. Destroying the stage tile underneath the Necrodancer (but not the Golden Lute) starts the second phase immediately. If bombed, he will teleport immediately without taking damage, but if dug out, he will remain in place. The monsters on the stage count against the Necrodancer's spawn limit, and doing the complete first phase destroys all but the back row of the stage, so the second phase is easier when started by destroying just a small portion of the stage.

For plot reasons, the Pacemaker does not work at all in this fight, and will be consumed without effect.

You fight the Necrodancer as Melody. The battle is timed - enemies continually spawn while the walls close in periodically. 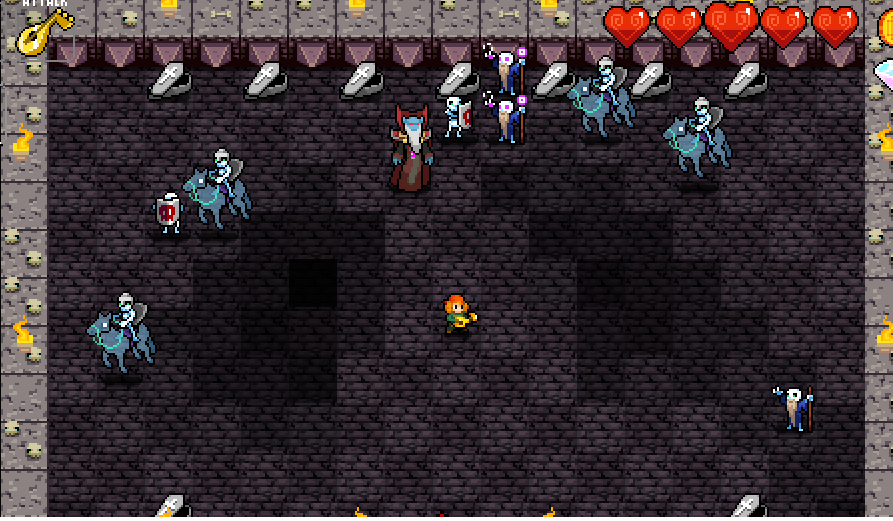 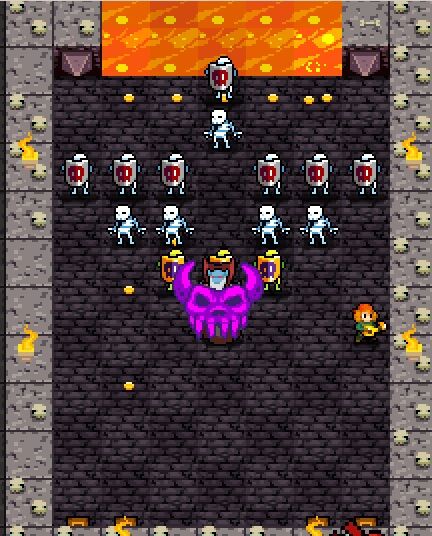 When fighting the Necrodancer as Melody, the room layout will be devoid of the stage. The stone walls surrounding the main room will progressively shrink inward as time passes, even if you don't open the main room doors. The walls will crush you roughly two beats before the end of the song. The song's tempo progressively increases as time goes on. Due to the time limit of the boss fight being based around the music, uniquely, the boss music will not start until the player has dismissed the splash screen introduction.

Special care should be taken to avoid the columns of tiles directly adjacent to the walls, as they close in without warning. If there is room, you will be pushed out of the way, but if the way is blocked (by a single enemy or otherwise), the trap walls will instantly kill you (even if you have a potion).

A number of sarcophagi lines the walls, and the Necrodancer will attempt to avoid you, moving every second beat one square in any direction or spending 5 beats waiting before throwing a bomb. After removing three hearts from the Necrodancer, the sarcophagi will be upgraded and bomber goblins will begin to spawn. Due to the sheer number of enemies present and the nature of the Golden Lute's attack, care must be taken as to not become surrounded and immobilized. (If the player does get immobilized, a bomb placed either by Melody or the Necrodancer can free the player, but of course they will take damage as a result.)

Like the previous Necrodancer fight, for plot reasons, the Pacemaker does not work at all in this fight, and will be consumed without effect.